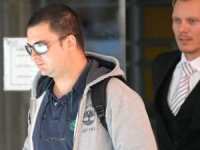 Cape Town – A Parklands man who was instrumental in the arrest of Brian Wainstein, the man dubbed the “steroid king” for allegedly dealing in steroids, has been charged with robbery.

Robert Matthey, 32, of Parklands, appeared in the Cape Town Magistrate’s Court on Wednesday.

His 67-year-old mother, Eleonora Matthey, of Hermanus, stood alongside her son in the dock on a charge of common assault. But after lunch, the prosecution withdrew the case against her.

The charges relate to a January 19 incident – the same day Wainstein was arrested at a V&A Waterfront residence. Matthey had filed a noise complaint with the police.

On arrival, the responding officers recognised Wainstein as the man who was wanted by Interpol for “drug-related crimes, counterfeiting and forgery”, and he was arrested.

A friend of Wainstein’s allegedly took pictures of Matthey on her cell phone at the time but he (Matthey) apparently grabbed the phone and deleted all the pictures. The friend later laid a charge of robbery against him for grabbing the phone.

Bail was set at R3 000. As part of his bail conditions, Matthey is prohibited from contacting Wainsteins’s friend and entering the V&A Waterfront’s residential and business premises.

Meanwhile, Wainstein is fighting extradition to the US. An indictment by US prosecutors alleges Wainstein had run an anabolic steroids distribution operation, along with his wife, since 2004.