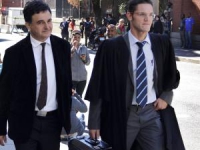 In July, Van der Merwe found Goldberg guilty on three counts of possessing African elephant ivory without a permit, and two counts of selling it.

This after police and CapeNature officials found in a raid on the Gift House Curio Shop in Sea Point, owned at the time by his mother Sonja Marcus, 43 905 ivory items, including necklaces, earrings and ivory stamps. The confiscated goods weighed more than 1 538kg.

More items were seized from the Sea Point homes of Goldberg and his mother.

Marcus died later that year and Goldberg inherited the business.

Van der Merwe had rejected Liddell’s argument that Goldberg had been just a manager at the time of the raid, and that he was unaware of the illegal ivory.

During sentencing yesterday, Van der Merwe said direct imprisonment was the only suitable punishment for Goldberg.

She said wildlife was the backbone of the country’s economy and poaching was a very “serious offence”.

“It is inexplicable and unacceptable to be in possession of that much ivory without the proper documentation,” Van der Merwe said.

She said although there was no indication that Goldberg was involved in the poaching of the ivory, as a manager he should have known what was happening in the business.

“I cannot overly emphasise that shopkeepers have to be extra vigilant about the origin of the ivory stockpiles they keep in their possession.”

Goldberg’s R50 000 bail was extended and he was ordered to inform the investigating officer of his travels. He travels frequently to the UK on business and to visit his son.

Outside court Goldberg’s attorney Leon van der Merwe said it could be four or five months before the matter was heard at the Western Cape High Court.

The items have been forfeited to CapeNature but will be suspended pending the outcome of the appeal. In a testimony in aggravation of sentence, CapeNature’s bio- diversity crime unit manager Paul Gildenhuys said that 104 elephants were killed daily in Africa and their tusks used in the illegal ivory trade. He said the ivory items found in Goldberg’s possession had been meant for the Asian market.