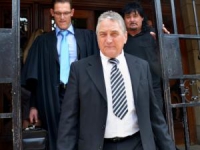 Cape Town – Diamond trader Dudley Bernicchi is relieved that he has been acquitted of murdering a diamond dealer in his office in the Picbel Parkade about two years ago. Bernicchi said his family and business had taken strain after Ryan Ivaniservic was killed on November 2, 2011.

“(But) at the end of the day there was a loss of life and I feel for that family. The incident wasn’t pleasant. He lost it in a moment of madness,” Bernicchi said after Cape Town Regional Court magistrate Wilma van der Merwe had acquitted him.

Van der Merwe said although she found the State’s witnesses to be credible, there were problems with how the investigation was handled.

She questioned why claims that Bernicchi or his lawyer, Leon van der Merwe, destroyed CCTV footage were not investigated.

She also said that it was “mind boggling” that a ballistics expert was not called to the crime scene immediately after the incident.

If workload or resources were a problem, why was the scene not secured until the expert examined the area, Van der Merwe asked.

“One would have been able to get a feasible reconstruction or at least be able to exclude certain aspects,” she added.

Advocate Philip Higgo, for Bernicchi, submitted during closing arguments that Bernicchi had shot and killed Ivaniservic from across his desk in self-defence.

Bernicchi, a qualified master diamond cutter, testified shortly before the incident that he and Ivaniservic had a heated argument about money due to him.

He said that he gave Ivaniservic R600 000 for diamonds but received only R140 000 when the diamonds were stolen.

The two were supposed to talk about how the balance would be returned.

But Prosecutor Vuyani Nati argued that Ivaniservic’s gun was still in his pants when he was shot. “At the time of the shooting (Ivaniservic) posed no threat to the accused,” Nati argued.

Magistrate Van der Merwe said Bernicchi had selective memory. He testified coherently about everything that led up to the shooting but could not explain exactly what happened when the shots were fired.

“I can subjectively say I don’t believe (Bernicchi’s) version but I need to consider the State’s version. The bottom line is, the court is of the opinion, objectively, that the State failed to prove its case beyond reasonable doubt and (Bernicchi) must be given the benefit of the doubt. The accused is acquitted,” Van der Merwe said.