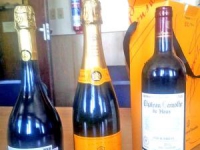 Cape Town – Three men and a woman arrested for possession of drugs estimated at more than R1 million were released from custody on bail of R10 000 each.

They were arrested last Wednesday. Wiesner, Gammerlich and Hoppe are Germans while Moralli is an Italian national, according to the charge sheet.

The accused, dressed in hooded tops and T-shirts and standing calmly in the dock, were all represented by defence attorney Joe Weber.

They face one charge of possession of drugs, but according to the State investigations were not yet complete.

The court heard that they could afford bail of R10 000. Prosecutor Janine Damon requested that the matter be postponed for the State to complete the investigation.

She asked that the court order, as part of their bail conditions, them to report to the local police station in Muizenberg at least twice a week.

Damon added: “It’s already been indicated that all four accused have already handed in their passports, so the State will not request that.”

“Your bail is set at R10 000 each,” he said, adding that the condition was that they all report to the Muizenberg police station, Monday to Friday, between 8am and 10pm.

“If you breach your bail conditions, your bail will be cancelled,” he warned.

Authorities confirmed last week that they had arrested the group, believed to be drug smugglers with ties to a European syndicate, while they were on their way to Knysna.

They were believed to be driving to Knysna in a campervan when they had been pulled over by officers near the Engen garage on the N2.

At the time police confirmed the group was found with “party drugs” – hashish, cocaine, and two bottles of what appeared to be liquid MDMA – with an estimated street value of more than R1m.

Police had received a tip-off that the group would be heading that way.

Investigations had reportedly led to premises in Muizenberg where more drugs were found.